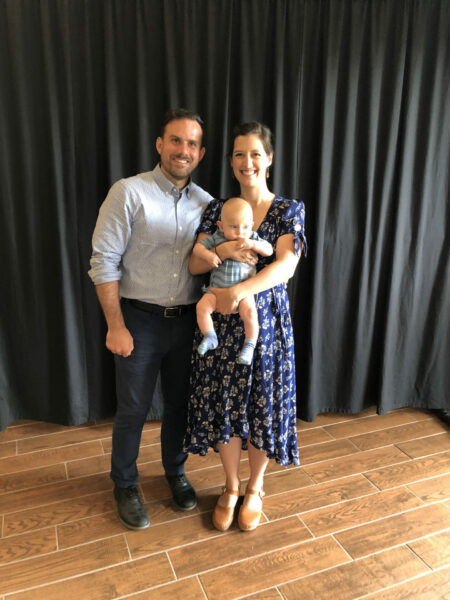 Thomas Manuel, the son of Fr. John and Presvytera Karen Manuel, grew up at the center of Church life as while his father served first as a Youth Director and later as a Priest. After graduating from James Madison University with a dual degree in International Politics, Spanish language and a minor in Latin American Politics he went to Holy Cross Greek Orthodox School of Theology in Brookline, Massachusetts. He graduated with his Master of Divinity in 2014 and served as a Pastoral Assistant and Youth Director of the Annunciation Greek Orthodox Cathedral in Norfolk, Virginia for four years. There, he met his now wife Elizabeth Manuel, a Norfolk native who grew up in the community at Annunciation. They both discovered their desire to serve in the mission field of Guatemala after participating on short term mission teams on separate occasions before they met. In January 2019 they moved to Southern Mexico where they attended Spanish intensive language courses for five months, and then moved to the village of Aguacate in the highlands of Guatemala to work full-time with the Priests and missionaries. As a seminary graduate, Thomas uses his skills to teach at the St. Andrew or San Andrés Seminary in Aguacate, as well as assists with teaching lay leaders at parish and regional retreats. Part of his job as a teacher at the seminary includes preparing coursework and translating related text from English to Spanish. Elizabeth uses her experience in chanting and liturgical music to assist with expanding the music repertoire and knowledge of the seminarians and women’s choir in Aguacate. Eventually they will be able to teach other choirs and communities in Guatemala and Southern Mexico to encourage full participation during the Liturgy and other church services. In March 2020, their son and newest missionary, Vasilios Steven Manuel, was born in Norfolk, Virginia, after they had traveled back to the states to prepare for his birth. Since then Thomas continues to teach the seminarians via Skype, and prepare theological courses in Spanish along with his translation work. Their return back to the mission field has been delayed due to the unfortunate pandemic but God willing they will return to Aguacate soon to continue serving as OCMC missionaries.

Thomas Manuel is the godson of Fr. John & Pr. Eleni Lardas. He will be ordained by His Eminence Archbishop Elpidophoros on Saturday, August 1st, 2020 at the Archangel Michael Greek Orthodox Church. In order to show care for the missionary work of the church, the Archangel Michael Church invites you to support Thomas, Elizabeth and Vasilios Manuel by attending the ordination, keeping them in your prayers and/or assisting with a financial donation.